THIS IS SO INTERESTING SO FAR

How do you save? I love this so far :) when do you think chapter 2 will be released?

Hopefully you've found it by now, but if you look at the top, on the left, there's a button with a down arrow. That's the save menu.

I see there is a choice of game reference haha.
Three has nice tastes.

Of course they do ;)

THIS IS FUCKING AMAZING

this is pretty interesting so far! loving everything about it. keep up the good work!

Can't wait to see the follow up! Looking forward to your updates!

come to think of it, the numbers introduced so far really remind me of some of my fav characters! zero: norman (tpn), one: bakugou (mha), three: satan(om!), five: near (dn). which absolutely makes me love it even more! <3

jeez Lin, i haven't even started the game but the intro & character options are SO intricate and well done!!! i love picking out every little detail, you've outdone yourself! seriously, i came here from sinners and saints but this pleasantly surprised me!

come on, all this praise is gonna make me blush <3 thank you!

Oh wOW this drew me in so quickly! I’m thrilled that I was asked about eye contact and loud noises, I can’t wait to see how that’ll be used. I’m honestly really impressed by the amount of customization there is. Each character is very individualized too and, while I’ll have a hard time remembering who’s who (yay cheat sheet in description), they’re all unique and I’m excited to get to know them.

can’t wait for the next chapter!

Me when One punches Four: Is this...is this love?

Amazing so far!! cant wait for the next chapter already eeeee

Oof ok. My review on this update is going to be super freakin long. I'll post it under this comment so anyone who wants to read it can. Anyways. I loved it! I'm so curious now. And so excited! And I still very much dislike One! Can't wait for the next update!

Many new things to take from this. If you haven't played yet, spoilers ahead. I highly recommend playing the game before reading this. Anyways, here are my thoughts on "The Numbers Game" so far. This is gonna be super long so if you care enough to read pls bear with me.  This is just my personal opinion so no one come at me for it.

We start the game right off with character customization which might I add is wonderfully extensive. The customization not only addresses pronouns, gender, and every physical aspect of the characters appearance, but also disabilities and mental triggers as well. That's very cool. I decided to go for a more timid main character on my first play through and you can really see how the customization affects your MC's actions.  For example, if you choose "tendency to fidget" during the customization process, your character will show signs of a preference for complete use of their hands as well as a need for something to do with them during stressful situations. I look forward to seeing how other aspects of your MC's personality and quirks will play into the story.  Now for my opinions on each of the characters so far. Zero is probably my favorite right now only because they treat your MC with so much kindness. The MC is clearly suffering from amnesia, and they take that into account when interacting with you. Not to mention I'm a sucker for the soft leader types. Even when you choose to keep your past relationship with Zero platonic, it's obvious they care about you a lot and I look forward to seeing what exactly happened between them and the MC.  I don't like One for obvious reasons. Knocking someone out while they're in the middle of a panic attack is...not ideal. To say the least. They seem like a wild little punk though, so I have a feeling they'll win me over really soon lol. We haven't really seen enough of the other characters yet for me to make any real opinion on them. Three seems cold and sarcastic which will definitely make for some hilarious dialogue in the future. And I haven't quite figured out Five yet. How they act seems to almost directly contradict how the games description portrays them. But its only chapter one so I suppose anything could happen. I like the fact that we didn't see every aspect of each character in the first chapter. That leaves you looking forward to finding out more in the next one. Plus, the alternative would have felt really rushed and forced which you obviously don't want from a storytelling perspective. To put it simply, this way makes the characters more interesting. The Boss is another character that was introduced and right from the get-go he's terrifying. He's cold and imposing and treats you more like an object than a person. MC shows very clear signs of emotional trauma the second they see him despite having no memory, and that only intrigues me further. What the heck did this man do to you? Overall, I am very satisfied with how this story is written. The only critique I have so far is the slightly unrealistic pacifistic nature of the MC.  I understand not wanting to give the main character the option to engage in violence (writing fight scenes can be a real pain and not everyone has an affinity for them) but I still don't like how the situation with One was handled.  It feels like we brushed off what they did to us waaay too easily. I understand not giving the mc the capability to intentionally hurt the cast, but I feel like that becomes a problem when the cast can very much intentionally hurt you. There's just a very concerning lack of self-defense options there. I just hope that in the future we can address that somehow, because if not it leaves a pretty big hole in One's development as a character (and their development with you if you choose that route). Again though, its only chapter one so anything could happen. Anyways that's all I have to offer. Overall, 4.5/5 stars. This game has so much potential already and I cant wait to see where it goes from here. So excited for the next update!

This is so amazing! The story is so unique & gripping, the way you set the scene, the feeling, the MCs inner monologue & characters are so great. I really cannot wait for more! 🖤

This has a really interesting premise so far, I look forward to seeing what happens next

So exciting to see how this game turns out! Just wonder, do you know when you think it'll be released and if we're gonna be able to download it? If so, will it be downloadable for mac? (Fingers crossed!)

I can definitely make it available for download once it's all released! <3

This is really good! im excited for the full game!

Can't wait for the next update to come out so I can hopefully punch that guy right back. :)

hi, there will be no options to intentionally hurt anyone in the cast!

but why not? If someone punched me they should expect one back honestly

Simply because I am not going to make this an option at any point in the game. I do not feel comfortable making an option like this, and I'd appreciate if you'd respect that.

Okay I'm sorry. I didn't mean to sound aggressive I was more so curious about it, but if you aren't comfortable with it that's fine!

Thank you for understanding!

I love the customization and the setting!! Can't wait for more to come!

this seems so good so far and as a trans person i absolutely love the customization! Keep up the good work as i cannot wait to see how the story unfolds in future updates!

The customization is amazing! I am so hooked on this story, can't wait for the next update! :D

Looking forward to the next update!

THE TENSION IS SO STRONG! I actually enjoy it! i can not wait for the next part to  come out!

This gonna be a fun game

This looks promising. Can't wait to play the rest!

Wow, the summary you gave us is really good, it really made me curious and interested on this

I think that's the end of the current demo ^^'

this has a nice start i love the character customization, im really looking forward to this!!

I finish what you did with the character customization! i can not wait to see what you got in store.

thank you! I hope you'll enjoy the prologue soon! <3

YESSS!! Potentially may give me art idea so I'm excited

Cute little customization! I just would like if there was an option to just select pronouns and gender separately? If you have trouble with the separate option choices or understanding what I mean I can show you code I use to do the separate options :) (Ex. A person using he/him pronouns)

the option for that is actually implemented -- you can either choose from set pronouns with a gender, or input custom pronouns, gender, and how others would refer to MC (a person/woman/man and so on). <3

I know that but is there’s a way to do something as such? Along with a gender selection? Just wondering if you’d be interested in the idea. I have a gender and separate pronouns options of different choices, of course it’s still in the making > 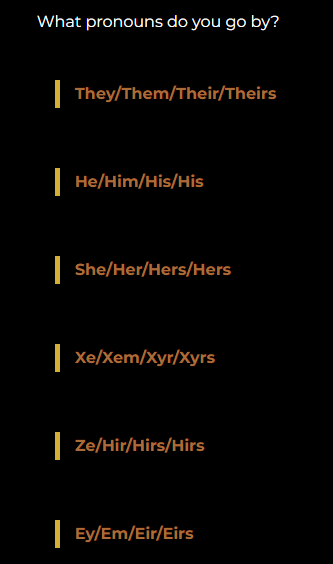 Hi!! I love the customization but there is one problem. When I picked "Cannot look at flickering light" the profile instead said that flickering lights is not an issue. Other than that this is awesome! I'm excited to see how this story will go!!

It's been fixed! Thank you for informing me!

I'm so hyped for this story.It looks interesting.Good luck and thanks for creating :)

the polyamorous routes are honestly my favourites to write <3

Is it only the character creator available?

Correct, for now it's only the character creator!

This seems like it's going to be really interesting!

The character creator was soooooo goooood! All the options that are made available for us to choose from will make MC feel more natural for us (at least it did for me).And your way of describing the eye colors is very unique. I liked all the costumization options.Thanks for sharing this😊

Aaah thank you for the feedback!! I'm glad you enjoyed the character creator! :d